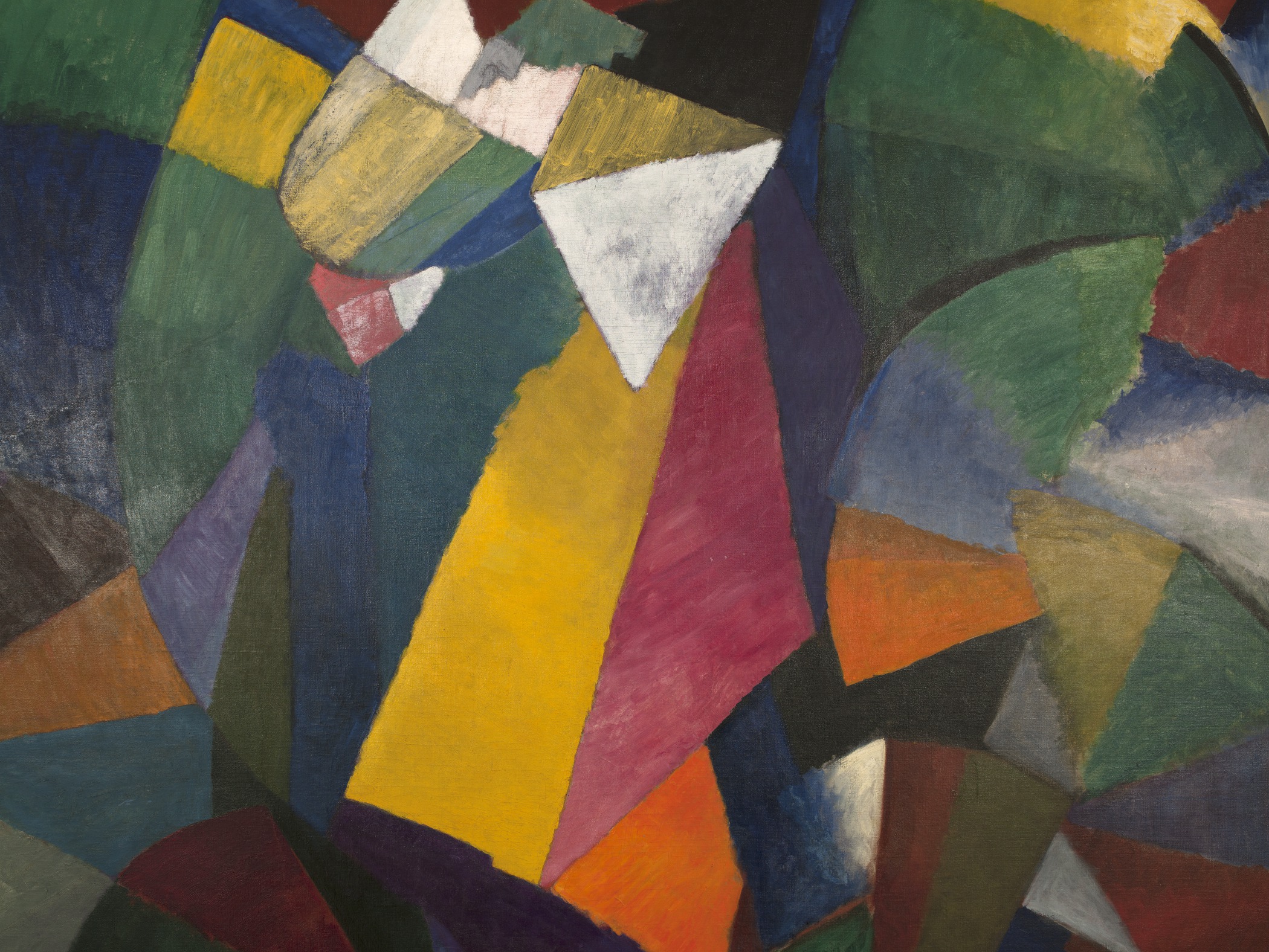 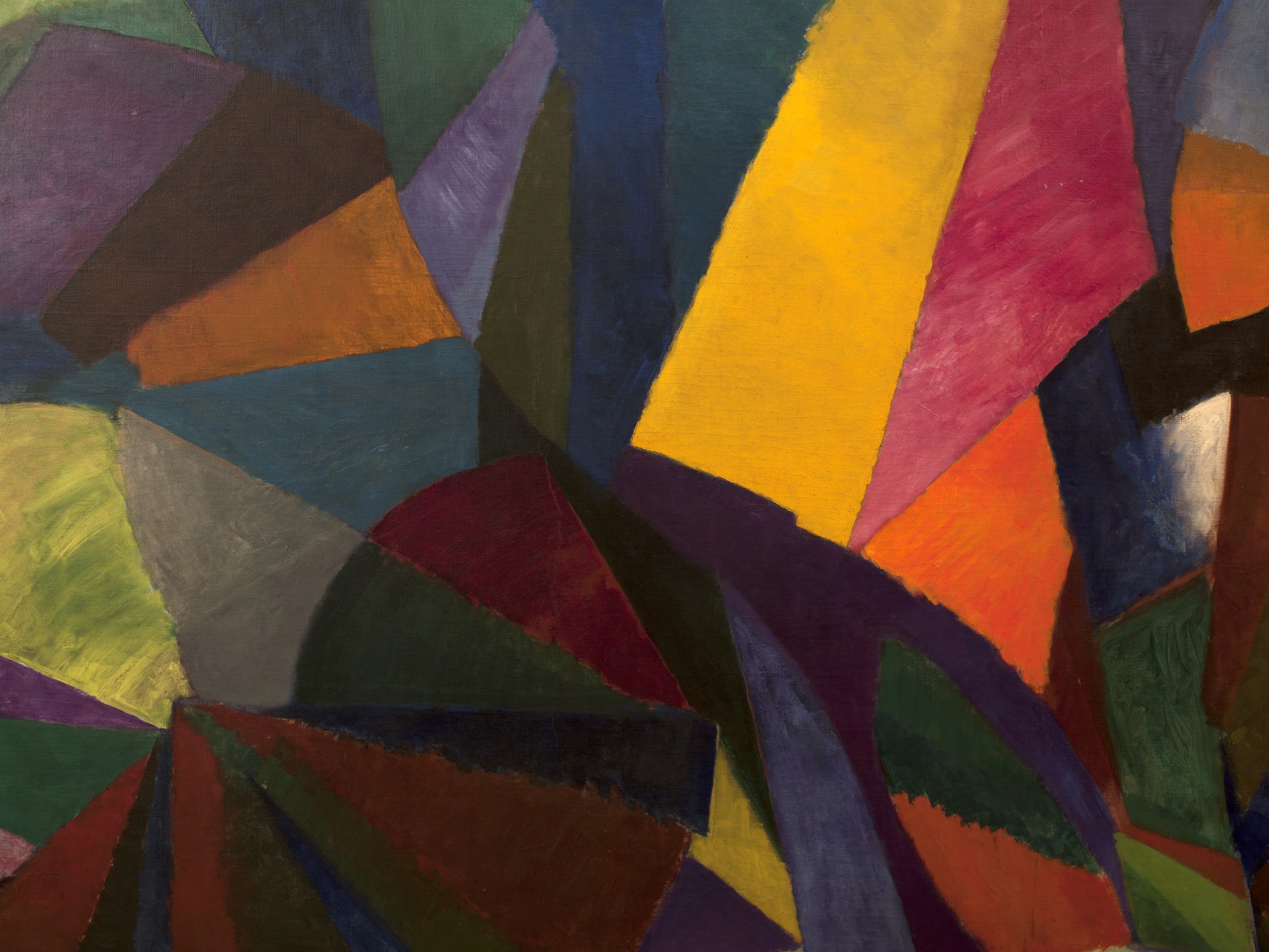 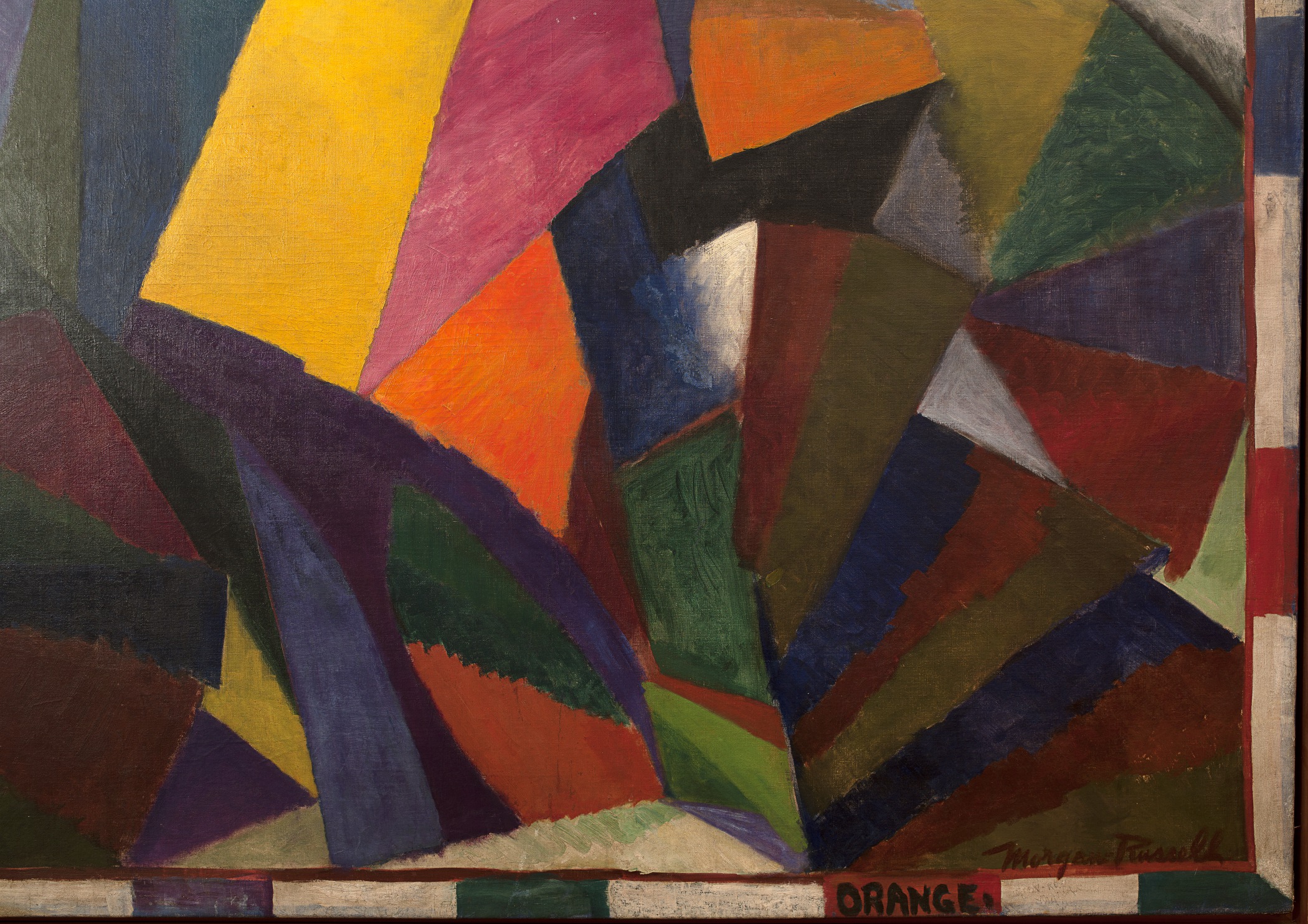 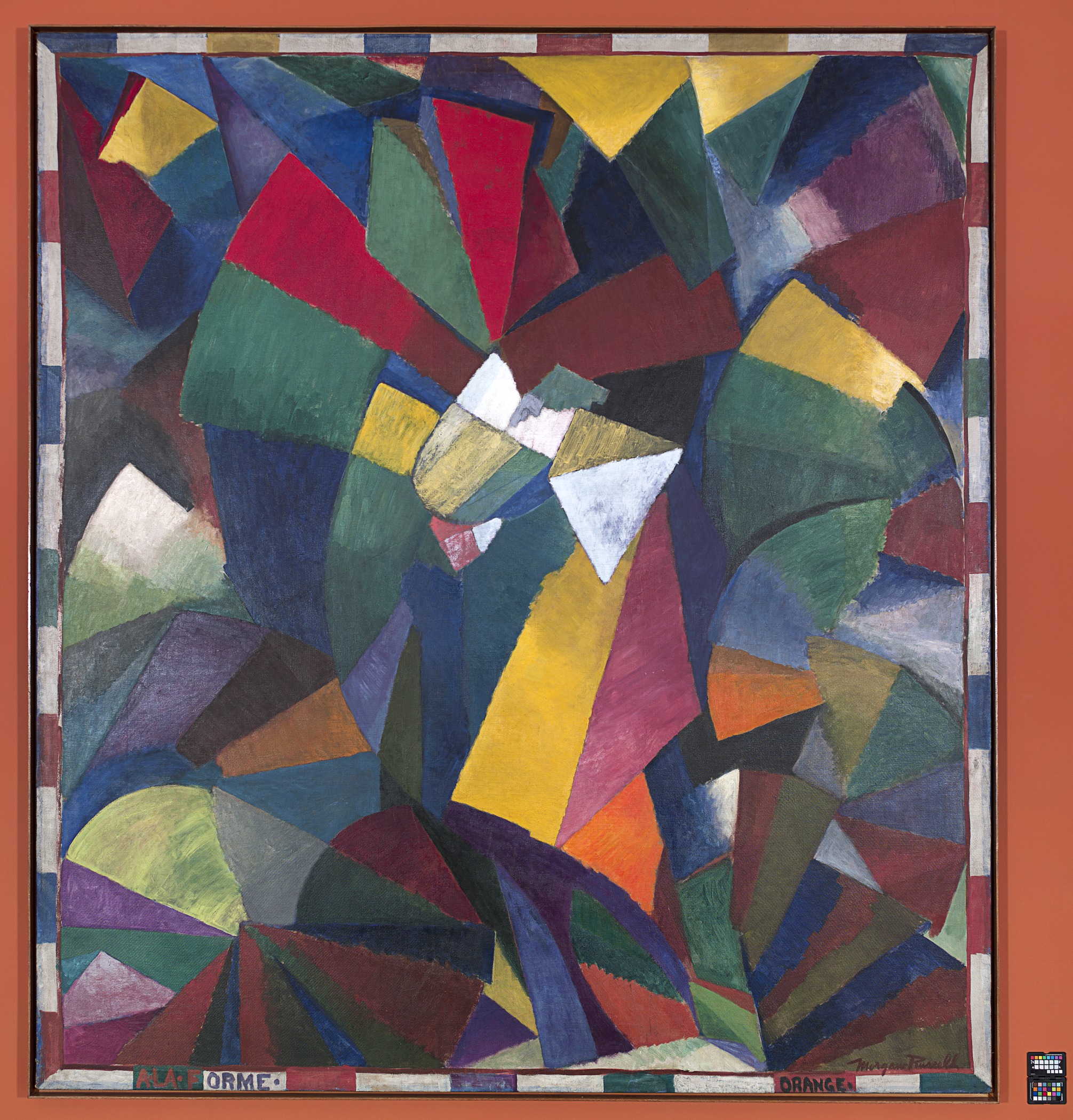 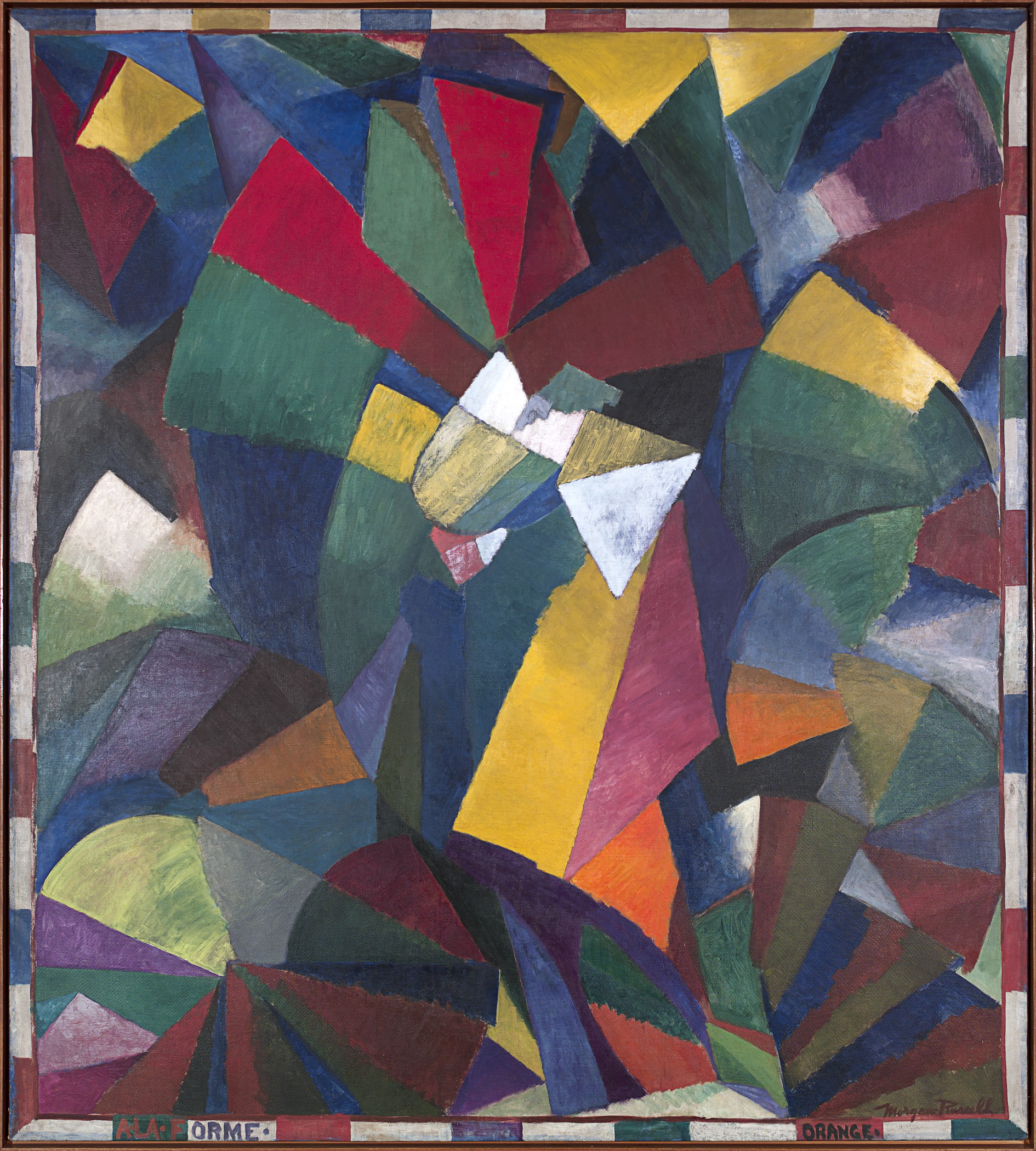 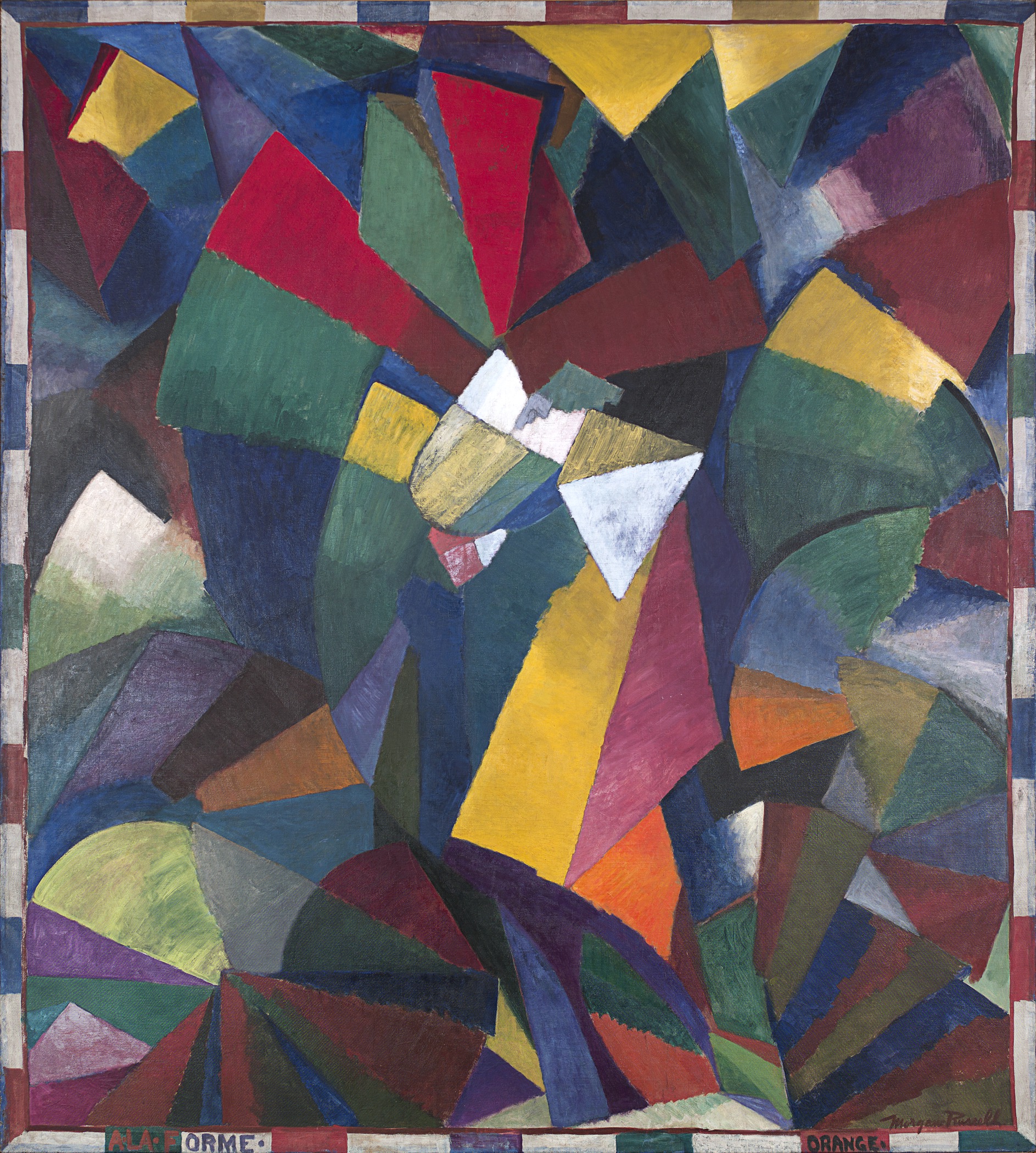 collection of the artist, until after 1951;
Rose Fried Gallery, New York;
sold to the Albright Art Gallery, April 23, 1958

Synchromy in Orange: To Form

Synchromy in Orange: to Form is enormous—it is the largest work of art in this exhibition—measuring more than ten feet wide by eleven feet tall.

This painting is a non-representational, purely abstract picture. The entire canvas is covered with geometric forms in a wild variety of colors. This description will move from the top left to the bottom left and then move to the center.

The top left has an arc shape that cuts across the corner in dark blue. In front of that blue on the left is an isosceles triangle in a dark brown. To the right of that triangle is another mirroring the first triangle, this one painted in brick red. In front of that triangle is a yellow diamond laying on its side that seems to be floating. The upper left edge of the diamond is rimmed with dark red. The yellow of the diamond is not an even tone—the left half is bright in color while the right half is mixed with gray, as if the shadow of something is cast across it. To the immediate right of the yellow diamond is a dark purple isosceles triangle with a dark blue trapezoid to its right.

To the right of this pair of triangles are two triangles angled to come together at the points, which are both pointed down. The triangle on the right is bright red and the one on the left, which has a rounded right edge, is a medium green tone. Below this pair and to the left are two, long trapezoids with the broader edge to the left. They are arranged side by side like blades of a fan. The one on top is bright red and the one on the bottom is green. To the right is a bright yellow square with a curving green trapezoid below it. To the left of that shape is a dark, Persian blue trapezoid with the wide end at the top. To this left of this shape is a large, light-colored, isosceles triangle. The top portion is painted white, while the lower half is a light green that grows gradually darker green toward the bottom.

Below this is a series of trapezoids lined up next to each other like a splayed hand fan. The left-most trapezoid is dark Persian blue. The shape to the right is a dark, reddish-purple. The next is dark brown, followed by a yellow ochre shape, then a medium blue, and finally a gray shape. To the left of the gray is another trapezoid with a curved top edge that is flipped in orientation with the smallest side at the bottom. This shape is bright yellow with some green mixed in. To the left of that shape is a thin triangle in rose madder or dark pink. Below the triangle is another triangle in a dark, dull greenish-blue with a smaller isosceles triangle in medium orange in front of it and a small, red triangle below it, tucked into the corner of the painting. To the right are a series of triangles placed one next to the other, again splayed like a fan, this time with the pivot point of the fan on top. The triangles are, in order from left to right, rust, black, dark blue, rust, dark brown, blue, dark brown, and rust in color. To the right of this fan are a grouping of triangles pointed in different directions in a variety of colors, starting with reddish-purple in the left, then yellow, purple, maroon, orange, and green, with a white triangle at the bottom, tinged with green.

Above this is the central group of the canvas, which is dominated by a long, narrow, diagonally-oriented trapezoid in bright yellow. To the right of this shape is a red isosceles triangle with the base against the yellow trapezoid, with a small, orange trapezoid beneath it. To the left of the yellow shape is a dark green isosceles triangle. Above this group is a small, white triangle with a smaller yellow triangle on top. To the left is a half circle with diagonal stripes in pale yellow, medium yellow, green, and blue, with a pale pink and a white trapezoid above. Above this group is a larger, diagonal trapezoid in reddish-brown, topped by dark green and dark blue trapezoids. At the top of the canvas are two yellow triangles pointed down with the base along the top edge of the painting.

From top to bottom, the far right quarter of the canvas has a series of trapezoid shapes arrayed like fans that flip back and forth, with the wide side of the arc on the right at the top, to the left beneath, to the right next, to the bottom of the canvas. The first group has shapes in dark green, dark blue, dark pink, and reddish brown. The next group begins with bright yellow at the top, medium green, and dark green. The next fan shape intersects with a green shape, a reddish-brown shape, followed by a blue shape that transitions to white. The next group begins with medium green, followed by a medium blue, and then a bright orange. A yellowish-green triangle from the next fan shape intersects the bottom corner, followed by a darker green triangle, and then a purple triangle, a dark red triangle, and finally a small gray triangle. The last fan-like array of trapezoids begins with a white patch, and turns to the right with shapes in shades of reddish-brown, brown, dark blue, repeated in the same order almost twice, ending with a brown triangle.

There is a thin, striped border around the edge of the entire canvas. The stripes alternate dark blue, white, ochre yellow, white, reddish-brown, white, and green. Across this striped border on the bottom left Russell has painted “a la forme,” and along the bottom right “orange.”

The title of the painting includes the word “synchromy,” which is connected to the Sychromism movement that Russell co-founded. Artists who worked in this mode connected the visual arts to music, with colors in their paintings linked to musical tones.

In 1911, Morgan Russell met fellow American artist Stanton Macdonald-Wright while they were both living in Paris. Together, they developed Synchromism: an abstract style that probes deep into color theory. Synchromy in Orange: To Form is considered a pinnacle work of the movement. Its complex composition and impressive scale is a spectacular visual synopsis of the experiments Russell and Macdonald-Wright pursued. Although this work appears abstract, numerous preparatory studies reveal that Russell related the underlying configuration to the human figure and the Cubists’ treatment of objects. However, for the artist, color and form were the most important aspects of his compositions. Russell eventually moved back to the United States in 1946.