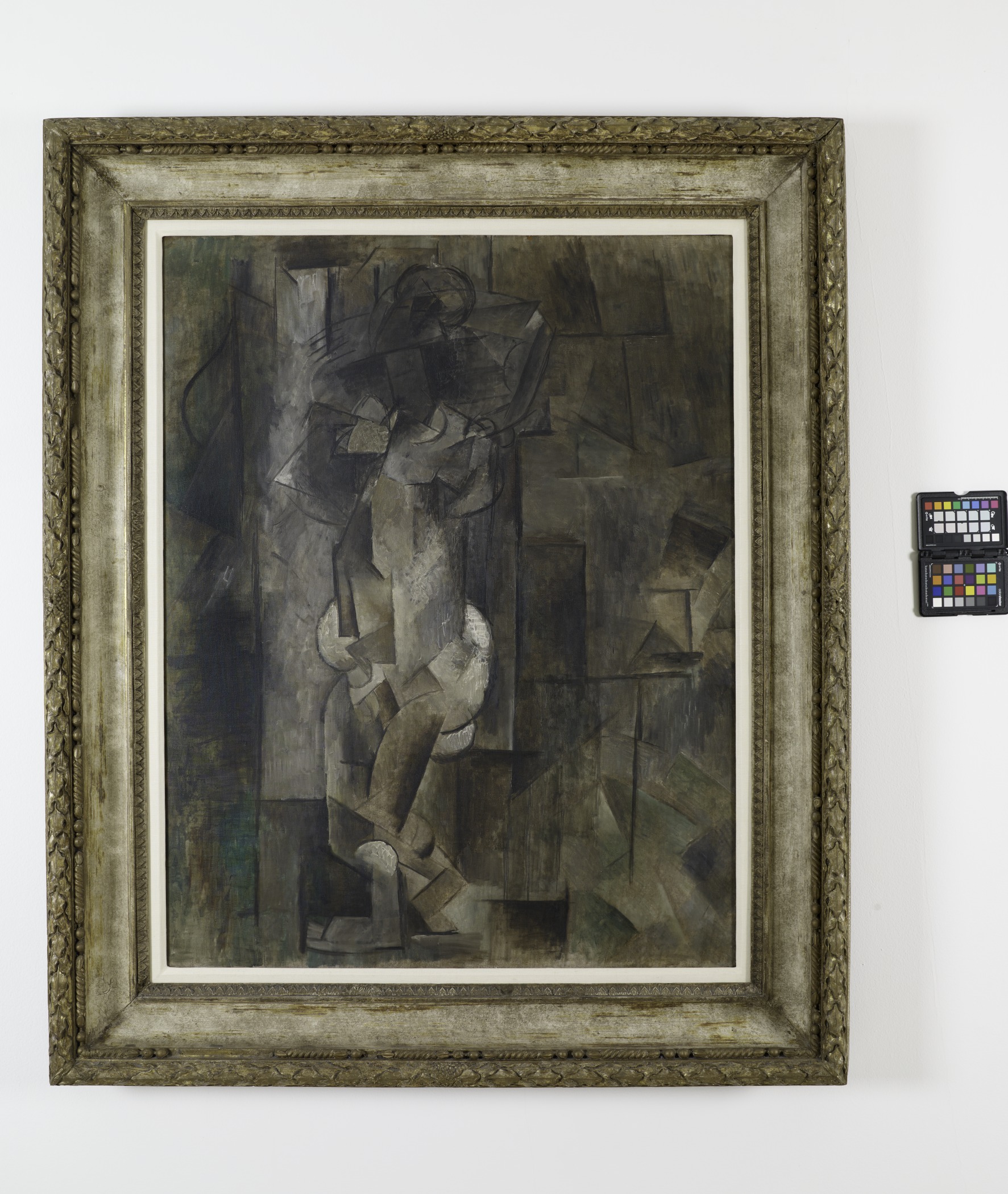 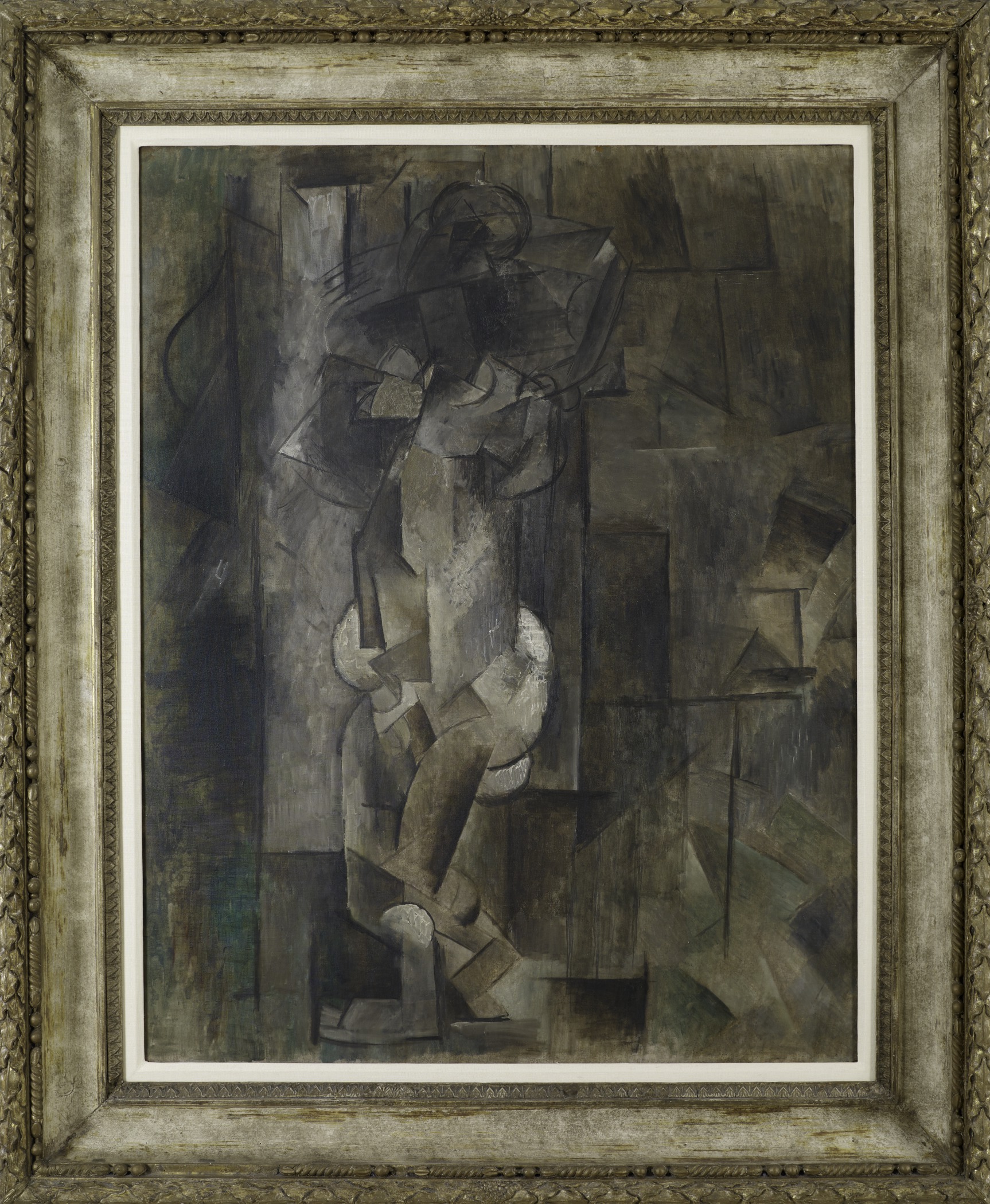 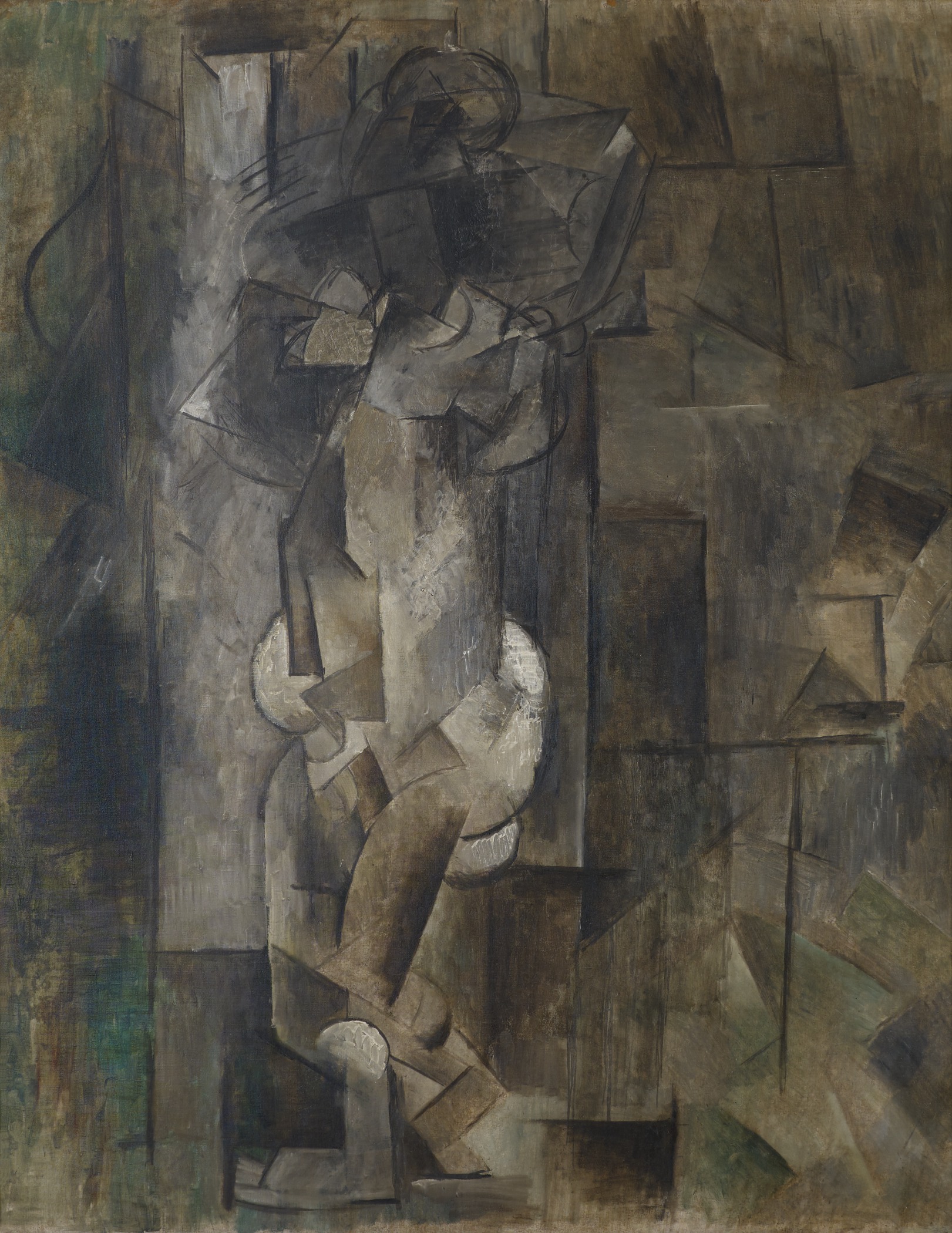 This artwork is four feet tall by three and a half feet wide and vertically oriented. The image is comprised of varying shades of muted greys, browns, dark blue, and white. Single black lines seem to be scattered throughout, mostly vertical, some diagonal and at times two meet to create 90 or 45 degree angles. Upon closer investigation there appears to be a cluster of lines that include some of the brightest shades and the only rounded lines in the work. This group moves from the bottom to the top of the work and sits just left of center.

As more attention is given to the rounded lines, focusing on a group closest to the top of the canvas a face emerges. The face appears to be titled up. Slightly curved, short horizontal lines indicate closed eyes and a single diagonally curved line extends from a forehead to a chin in between the eyes. To the right of the figure’s face, on our left are five closely set horizontal lines. The furthest top line is interrupted by the face and continues on to the left side of the figure’s face and bends at an elbow. A half circle is placed where a bicep muscle would be. Two vertical lines who an elongated neck. The space where shoulders and a chest belong is filled with short, mostly straight, intersecting lines. The space in between the lines is filled with sections of different shades of grey and tan. At each line the color is most concentrated. As the color moves away from the line is fades, direction is indicated by the marking of each brushstroke.

The figure’s torso includes some of the brightest whites and palest tans. The edges of the stomach are shown with single black lines which include the same shading as described before but do not consistently connect with other lines to create a realistic figure. On the figure’s left, just below the torso we see the two largest curved lines of the painting. A bright white-grey meets the edge of the curve which could indicate a buttocks. A diagonal line, below the buttocks that moves from the figures hip to the knee is colored with a dark brown. It is interrupted by two curved lines and a diagonal line in the opposite direction below the two curves. This movement of line suggests the figure’s left leg is bent and the foot could be moving away from the floor. In contrast, two parallel horizontal lines on the figure’s right side sit just above the bottom of the canvas and are meet by a set of two parallel vertical lines. This appears to be the right calf and foot of the figure’s right leg which is painted in a dark grey and seems to be bearing most of the figure’s weight.

The motif of a standing female nude with an upraised arm refers to classical sculpture. As early as 1905, this subject begins to appear with surprising frequency in Pablo Picasso’s work, including La toilette, also in the Albright-Knox's collection. Nude Figure is a triumphant example of Analytic Cubism (1909–12). Each form depicted in the painting has been divided up into small geometric facets in order to represent the object from all viewpoints at the same time. The background is analyzed and reconstructed in the same way so that it merges with the objects depicted, flattening the space of the composition.